Returning ‘Beast from the east’ has bark worse than its bite

The energy market’s changed over the last 7 days – keep up to date with the Haven Power market report.

Here’s a summary of the week starting 12th March: 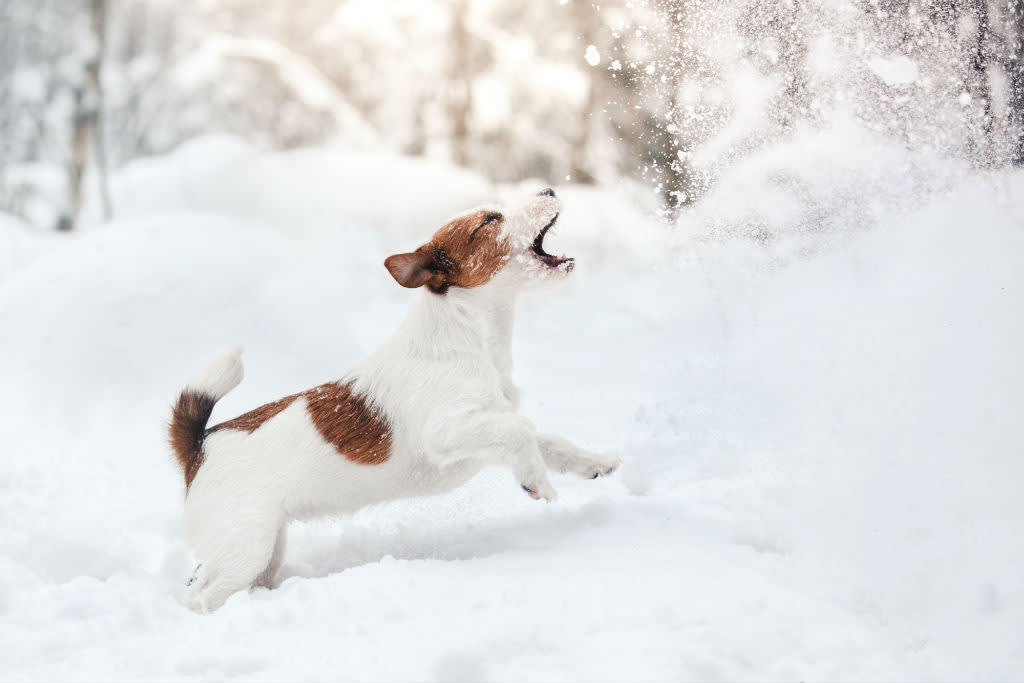 The threat of cold weather at the weekend inflated day-ahead prices throughout week 11, but high levels of wind kept prices from spiking.

Prices for day-ahead baseload delivery reached a high of £86.12/MWh for delivery on 13th March. Wind output – averaging only 1.6GW over the course of the day was the main driver; more expensive coal-fired generation made up for the lack of wind. For the rest of the week, prompt pricing remained fairly consistent, as higher levels of wind generation were set to return. The lowest price (£59.39/MWh) was for baseload power delivery on 12th March; when wind output was relatively low for the week. 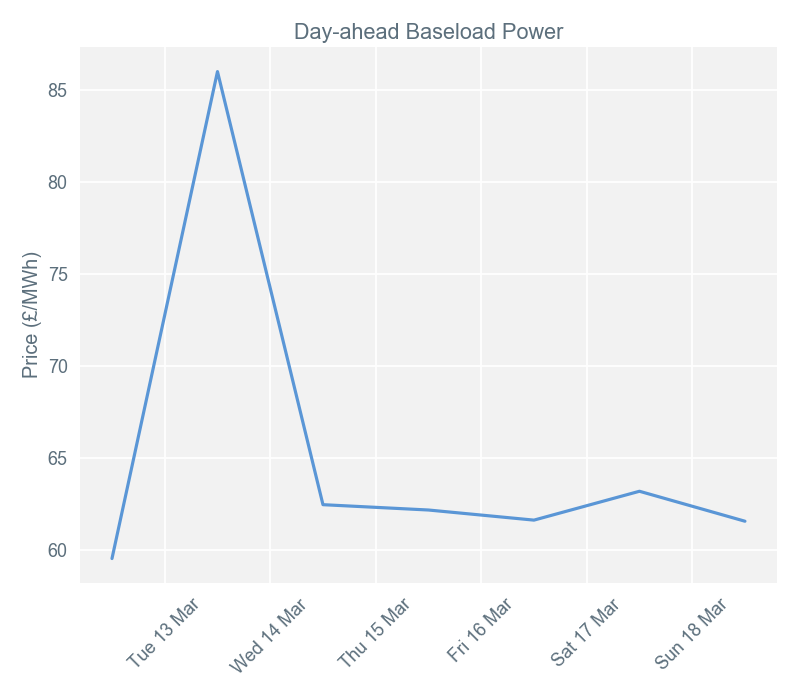 Prices for settlement period 35 (17:00-17:30) on Friday 16th March were the highest for the week. During this period, National Grid once again called upon pumped storage hydro to generate, to help alleviate system stress. The system operator paid these stations between £115/MWh and £140/MWh to generate, leading to the final system price of £123.66/MWh. This settlement period is at a time when industrial and domestic demand overlap, resulting in a peak. The lowest imbalance prices were during settlement period 40 (19:30-20:00) on 14th March, when the price fell to £16.43/MWh. During this time, the electricity system had too much generation and was in oversupply. National Grid paid a number of Combined Cycle Gas Turbine (CCGT) and coal plants to reduce their generation output. The system operator also allowed Foyers pumped storage hydro plant to consume electricity at no cost, to take some power off the system. Pumped storage hydro plants typically consume electricity when it’s cheaper, so often offer themselves to National Grid to consume power at times of system oversupply. 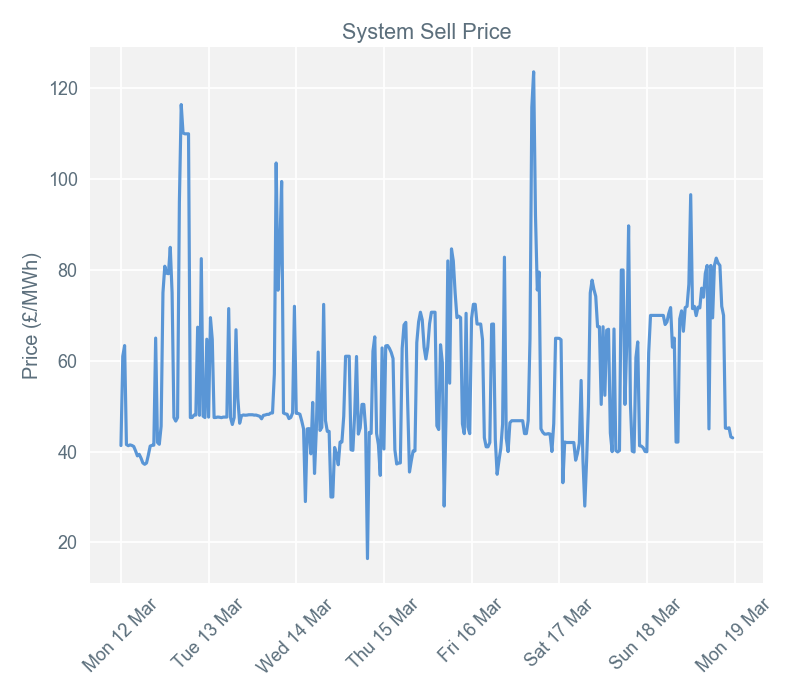 Low wind output towards the beginning of the week led to a spike in day-ahead prices for Tuesday. However, as the wind picked up later in the week, prices subsided as quickly as they’d risen (although they remained at an inflated level, due to the cold weather on the horizon). Solar generation was fairly benign, as the so-called ‘Beast from the east’ returned a second time and brought wintry conditions over the weekend. Wind output peaked at over 14GW on 17th March, and reached its lowest point (0.9GW) on 13th March. 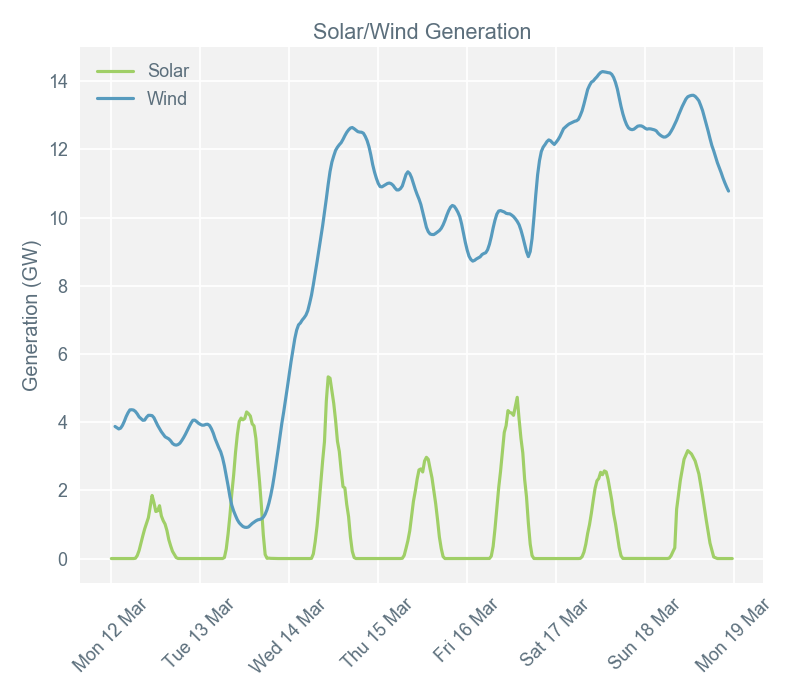 Secure and Promote* (Season +1, +2, +3, +4) baseload contracts lost £0.85/MWh on average, as the UK wholesale market experienced generally bearish conditions last week. This reversed many of the gains achieved by the previous week’s bullish behaviour. The front season (Summer-18) lost the most value (around £1.20/MWh) as the losses on the prompt price fed through to the rest of the curve. Last week, the front season’s higher prices had dragged the curve up but, as the weather outlook was warmer than originally thought, the front of the curve suffered losses and brought down the later dated seasonal products. 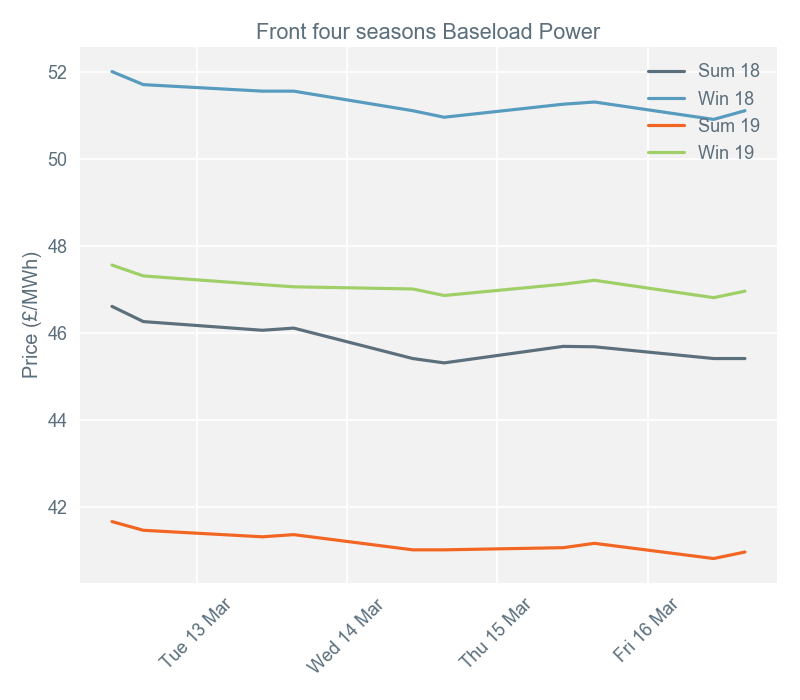 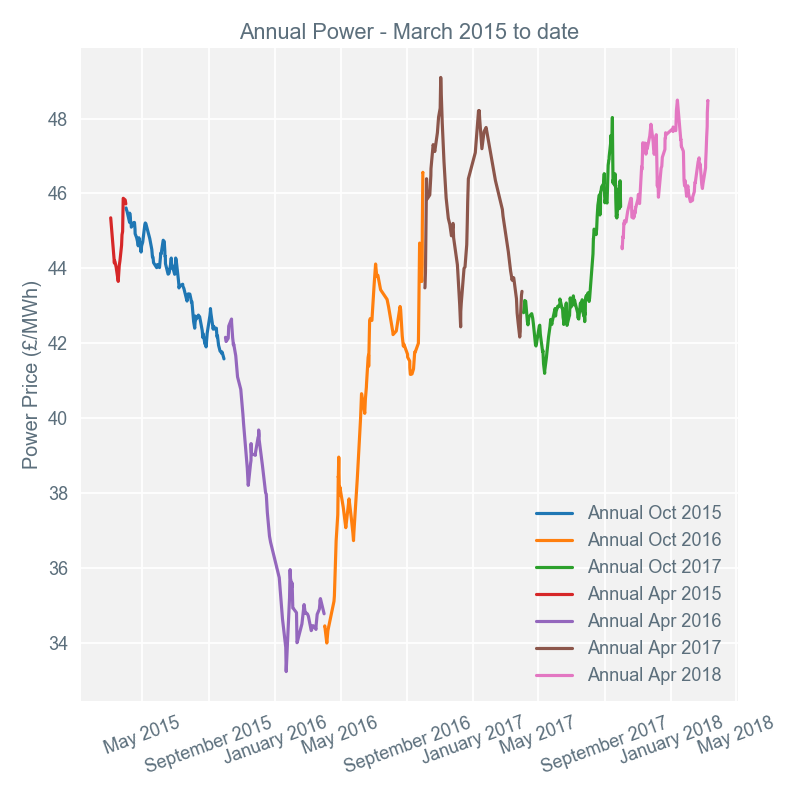