The Haven Power market report: keeping you up to date with energy market changes over the last 7 days.

Here’s a summary of the week starting 26th February: 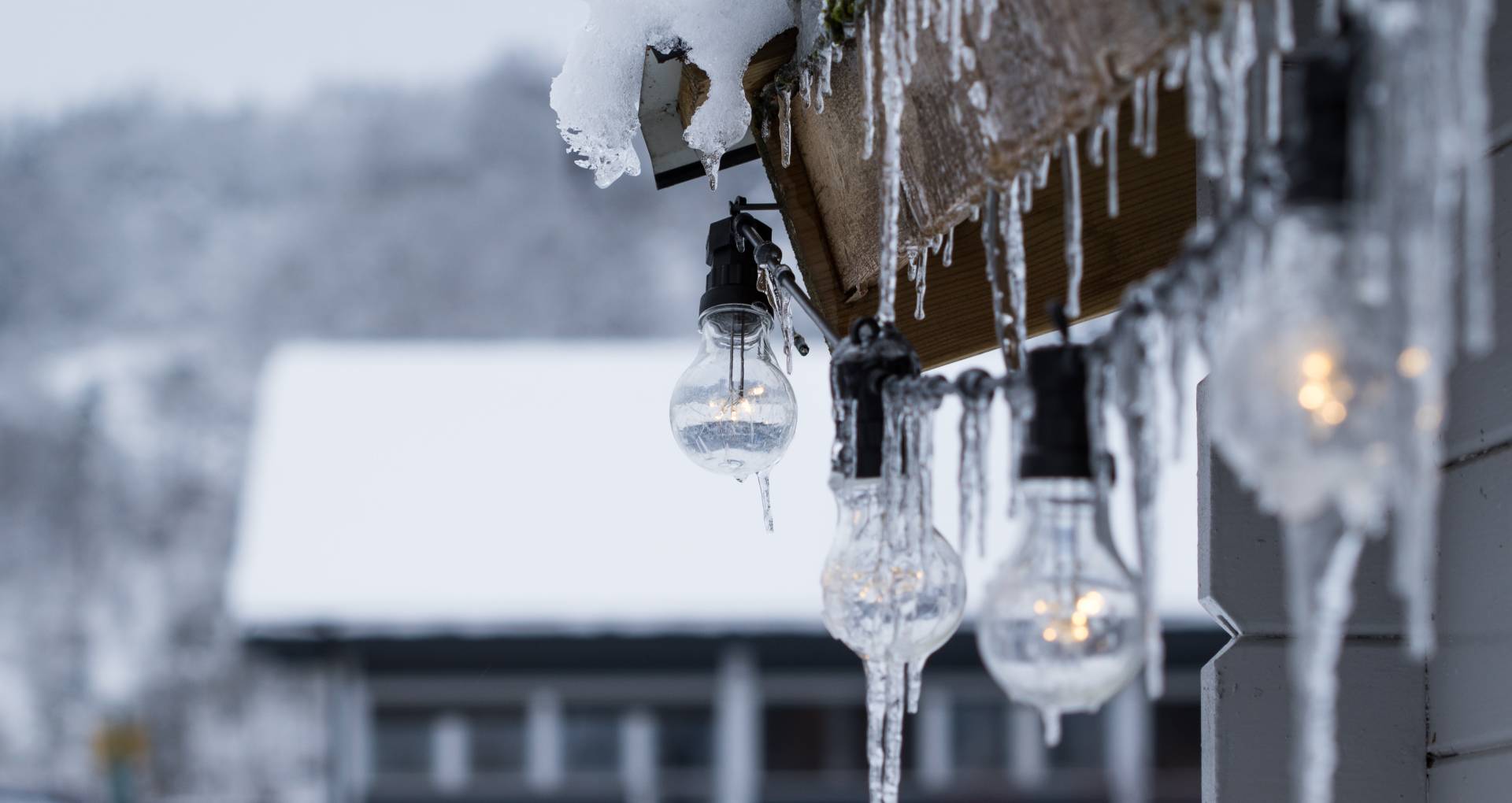 The arrival of very cold weather, along with the threat of gas shortages in the UK, led to very high day-ahead prices.

Prices for day-ahead baseload delivery during week 9 reached a high of £92.57/MWh, for delivery on Friday 2nd March. This occurred as the cold weather drove day-ahead National Balancing Point (NBP) gas prices up to over 200 pence per therm (p/th); just a week before, prices were at 65p/th. Even prices for delivery on Monday 26th, the week’s lowest, were £59.29/MWh.

Even though wind generation was high during week 9, it did little to quell the surging day-ahead power prices. Usually, Combined Cycle Gas Turbine (CCGT) generation forms the biggest part of the UK fuel mix. However, as within-day and day-ahead NBP prices soared, a number of gas plants became unprofitable. As a result, coal-fired generation took advantage and made up a large part of the UK fuel mix for the entire working week. The higher cost of coal-fired generation provided further stimulus to rising day-ahead power prices. 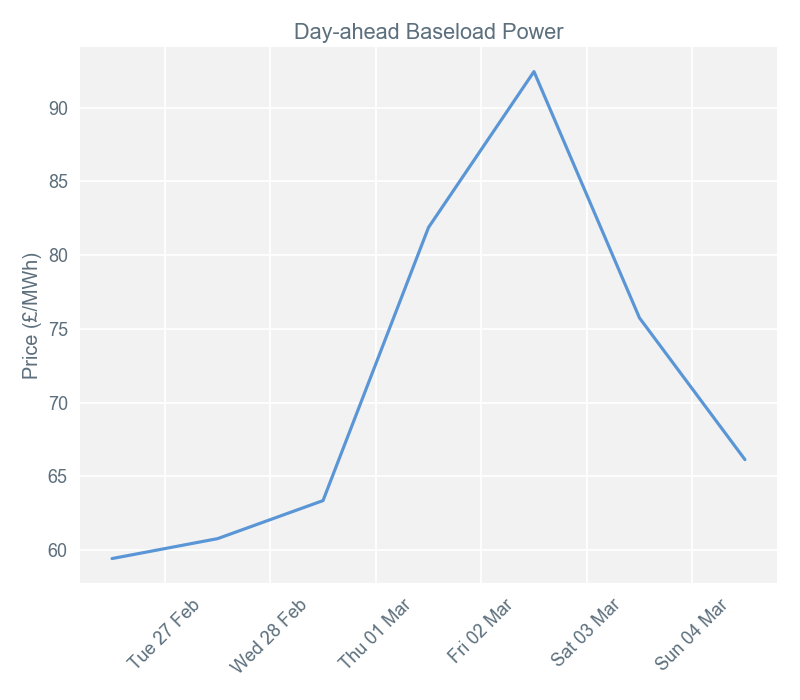 Single imbalance prices during week 9 averaged £131.07/MWh, with a range of over £1100/MWh as prices spiked on 1st March and plummeted the following day.

Prices for settlement period 27 (13:00-13:30) on 1st March reached £990/MWh – a high not seen since May 2017 – as the system was 1GWh short of generation. With National Grid having already paid other, cheaper generators to produce power during this period, the system operator resorted to paying £990/MWh to Killingholme CCGT to generate. The cold weather – and subsequent rise in demand to the year’s highest level – wasn’t the only cause of the spike in prices; there was also an extreme hike in gas prices. A number of unplanned outages at gas stations were also a contributing factor to the deficit. Single imbalance prices reached a low of -£142.74/MWh during settlement period 13 (06:00-06:30) on 2nd March. At this point, National Grid paid Dinorwig pumped storage hydro, and both London Array and Thanet wind farms, to turn down generation as the UK system was oversupplied. 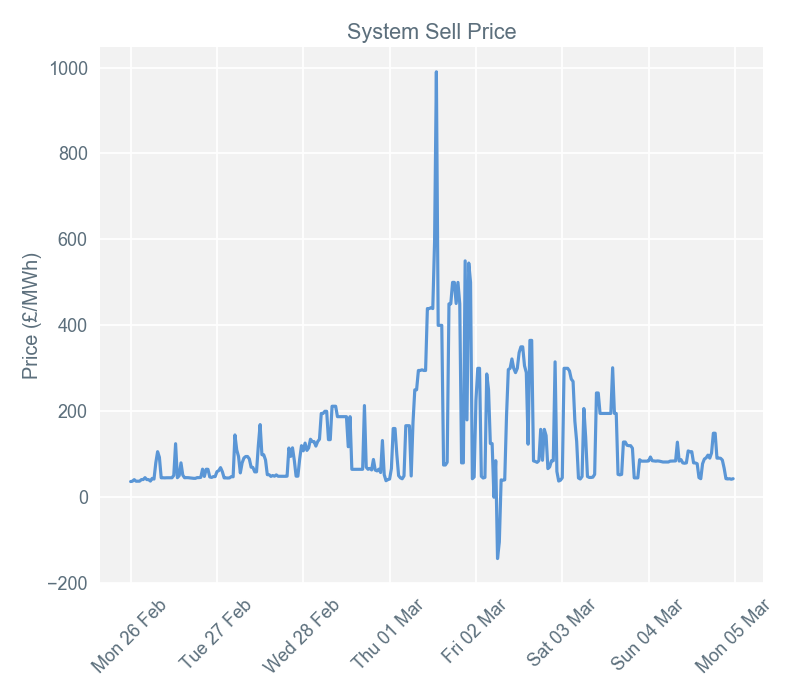 Renewable generation was high throughout week 9, as wind generation averaged above 9GW. Despite this high, coal output averaged over 10GW during the working week.

The recent trend of high wind output coupled with low temperatures continued during week 9. Wind output reached a peak of over 13.5GW on 1st March, before tapering off into the weekend as temperatures increased – putting an end to the cold conditions of previous days. Coal-fired generation made up a large part of the UK fuel mix last week, as the surge in gas prices made many gas plants unprofitable. Coal-fired generation has been called upon over the last couple of weeks to fill the gap left by a decline in CCGT generation, as gas prices made them uneconomical to run. 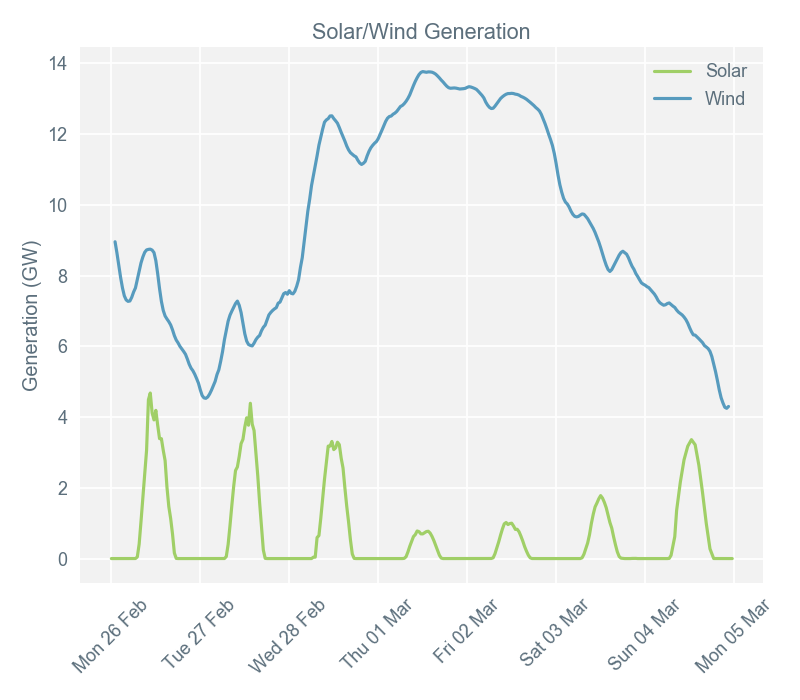 Secure and Promote* (Season +1, +2, +3, +4) baseload contracts gained £0.38/MWh on average, as the UK wholesale market experienced generally bullish conditions again last week. Prompt prices were the main driver of increases in the curve, as the bullishness filtered through to longer-dated seasonal products. The Brent Crude Oil benchmark was bearish following an announcement from President Trump that the US would impose tariffs on some metal imports, sparking fears of a trade war. 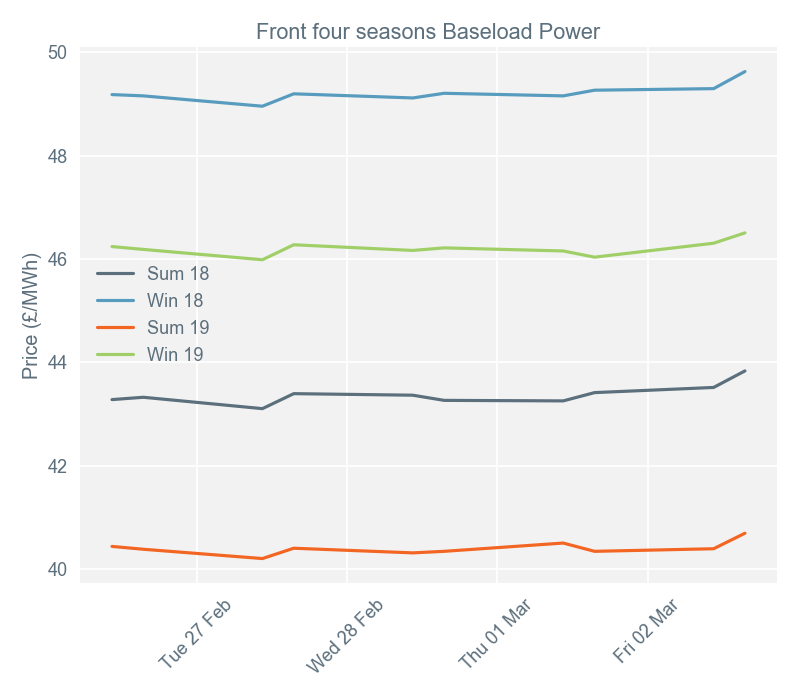 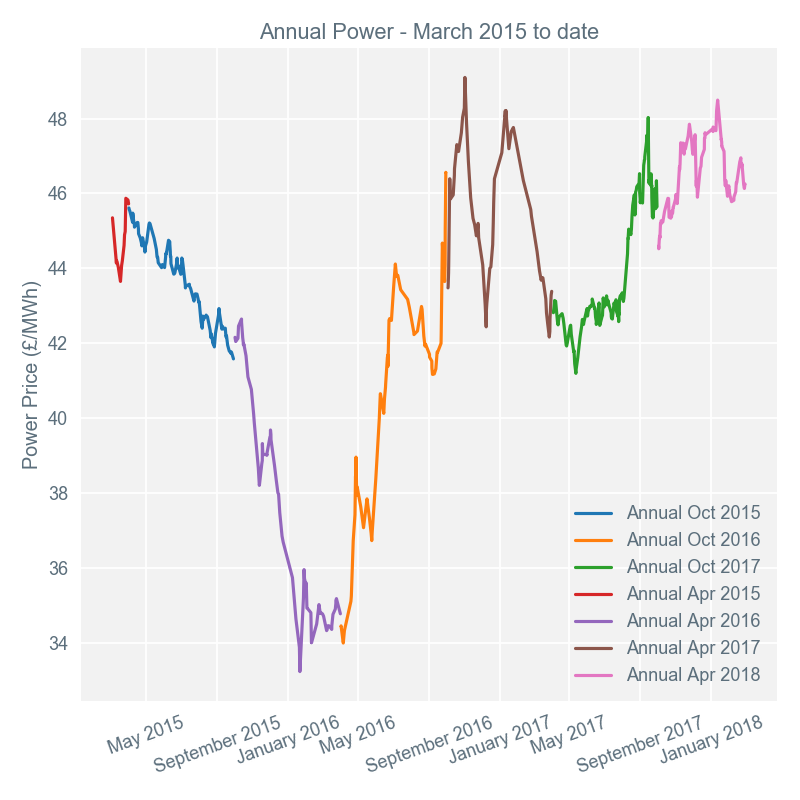