Warning! Warning! The Triads are coming…

Between November and the end of February each winter, there’ll definitely be three ‘Triads’. These are the half-hourly settlement periods of highest demand in Great Britain (GB), separated by a minimum of 10 clear days.

The Triads are the method by which National Grid Electricity System Operator (ESO) charges suppliers for their use of the transmission system on the UK mainland. Generators and suppliers have to pay their share of installation and maintenance costs, with suppliers either pricing it into their tariffs or passing it through as a Third Party Cost (TPC). Here’s a graph showing the Triads for 2018/19: 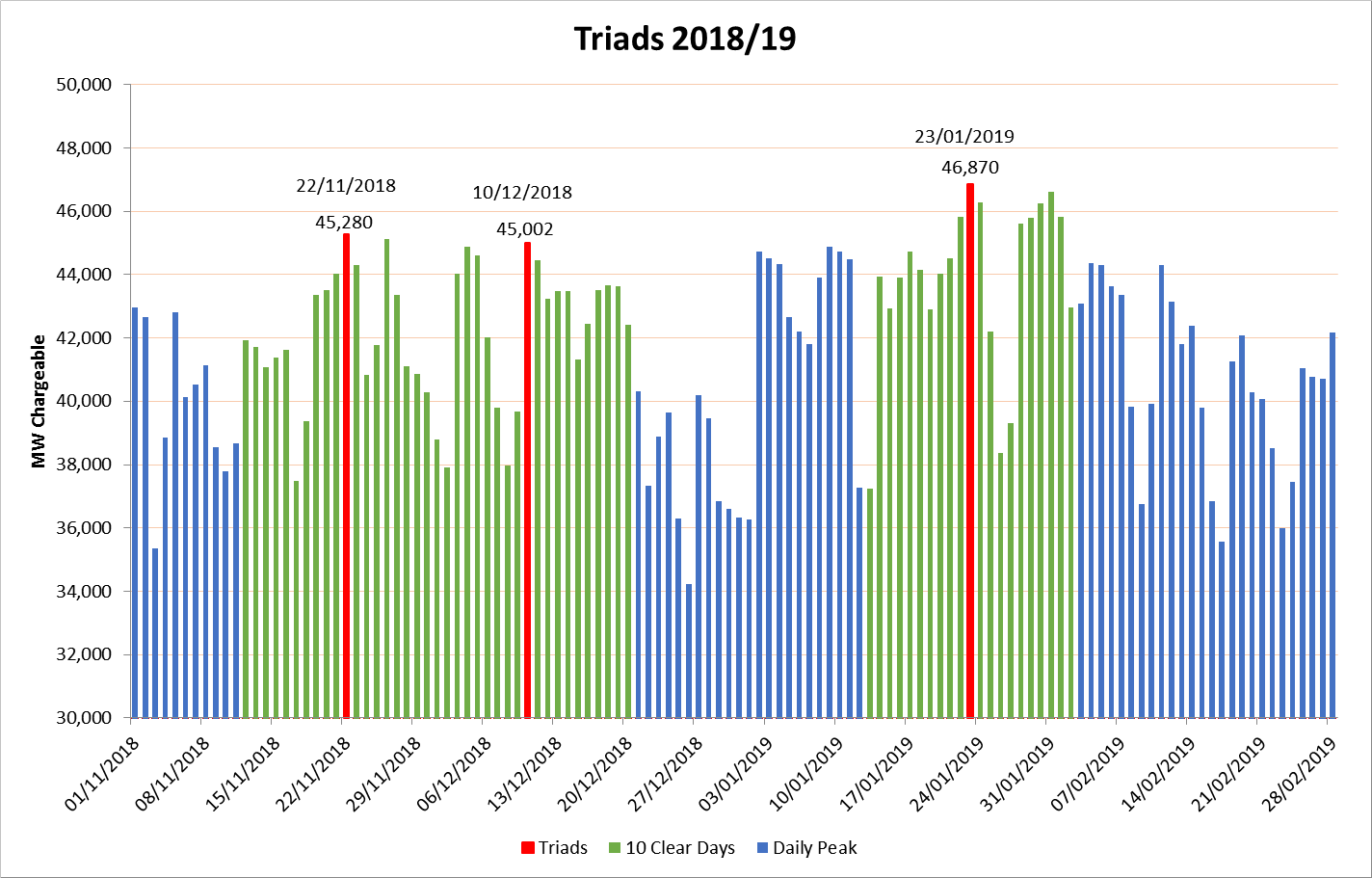 How do the Triads affect you?

If you’re a business customer with a half-hourly meter on a pass-through contract, your average demand for the Triad periods will form the basis for your charges. Therefore, changing your energy consumption and behaviour during the Triad season can have a dramatic effect on your overall energy costs. If you’re not sure which type of contract your business has with Haven Power, contact us to find out.

The cost can vary from one Distribution Network Operator (DNO) to the next. For example, if your business is within the Eastern GSP Group (_ A, or area 10), the average Half Hourly TNUoS change for 2019-20 is £49.90.

This means that, if you used 1kWh in each of the three half-hour Triad periods (which equates to 2KW), your total Triad usage would be 6KW. Dividing this by three gives you an average usage of 2KW; multiplying this by £49.90 gives you a total of £99.80 (so, around £100). This makes the average cost per Triad around £33.33.

At the time of writing, and using the Eastern figures as above, an average day rate should cost around 15p/kWh. However, the cost of usage during a Triad would equate to well over a 200-fold increase above this.

So, if this was your peak consumption, you’d be ‘hitting’ a Triad and it would almost certainly be the worst possible scenario for your energy costs.

Triads – an exercise in probability

The Triad season starts at the beginning of November and runs until the end of the following February: a period of four months. An abundance of snow in November - as happened in 2010, for example - will make it more likely for a Triad to happen in this month in comparison to a year when the snow doesn’t fall at this time. However, forecasting Triads in November or December must also account for the possibility of a freak weather event in February that hasn’t yet occurred and may not ever occur!

This phenomenon means that Triads are much easier to forecast later in winter, once the earlier months’ demand is known. A classic Triad day (and settlement period) would be 5:00-5:30pm on a cold, still, dark January day. This is when heating and lighting demand is at its highest and distribution-connected generation (such as wind and solar farms) won’t offset high demand.

However, in the 2018-19 winter, a Triad occurred in the 18:30-19:00 settlement period; the first time this had happened since 1994. This was due to Triad reductions and indicates both that more customers are taking action and that the energy system is becoming more flexible and dynamic .

How can you benefit from our Triad warning service?

By reducing consumption during likely Triad periods, you can save money. In fact, this is one of the most lucrative cost-saving measures you can take - as long as you’re flexible and intelligent with your usage.

Our forecasting and analysis team has developed a series of statistical and machine-learning models to calculate the probability of a Triad on each winter’s day. This is a dynamic forecast that changes every day, depending on industry and weather forecasts.

An example of our Triad warning service

We’ll pass this information to you via email – then you decide whether to act.

How can you take action?

During a period of high Triad risk, you can reduce your consumption by using less heavy machinery and equipment, adjusting working patterns, or shutting down sites entirely. Alternatively, you can use on-site generation or energy storage to reduce the amount of electricity you’re consuming from the grid. You must make a critical decision: when is it worth reducing costs by reducing usage? In this case, you must also consider the cost of reducing your productivity or the fuel costs involved in running your on-site generation.

How can Haven Power help?

Haven Power’s energy services team can help you identify any energy intensive equipment, install generation assets and energy storage on your site, and help you beat the Triads! To subscribe to our Triad warning system, please provide your name, company name, email address and Haven Power account reference to triad.warnings@havenpower.com